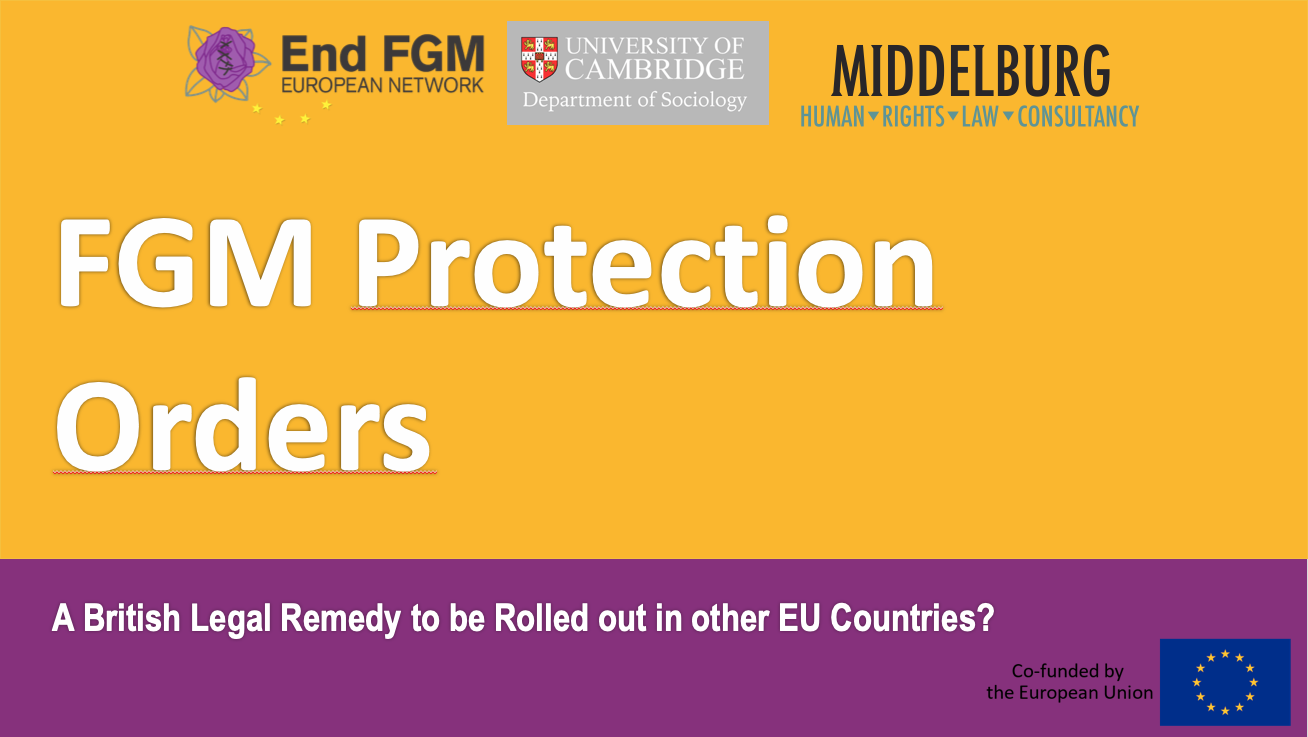 I co-organized a webinar entitled ‘Female Genital Mutilation Protection Orders: A British Legal Remedy to be Rolled out in other EU Countries?’ together with Dr. Charlotte Proudman (research fellow at Cambridge and barrister at Goldsmith Chambers) and Chiara Cosentino (End FGM European Network).

‍End FGM European Network is an umbrella network of 30 European organizations based in 14 European countries operating to sustain European action to end FGM/C by connection grassroots communities with NGOs. We work together on a regular basis and it is always great to collaborate, initiate and brainstorm together. Dr. Charlotte Proudman and I contacted the End FGM European Network a few weeks ago, because we had the idea to organize a webinar about Female Genital Mutilation Protection Orders (FGMPOs). FGMPOs were introduced in England, Wales and Northern Ireland in 2015 and they were introduced in Scotland this year. They have been widely used by public authorities and family members to prevent a girl from being subject to FGM/C. They are largely injunctive remedies that for example, prevent a girl at risk of FGM/C from leaving the country. I came across FGMPOs when I was working on a background paper for the UN about a year ago, and it immediately sparked my interest. After conducting interviews with various stakeholders in the UK, I became even more enthusiastic.

Over the past few months, Dr. Charlotte Proudman and I wrote an abstract together about this legal remedy that we also presented during a conference in Bangalore, India in February 2020. We found out that although there is a proven track record on FGMPOs working effectively in the UK, there seems to be a lack of knowledge about this legal remedy in other European countries, while they might be effective in those countries as well to protect girls at risk. For this reason we decided to organize a webinar as a first step to explain how FGMPOs work and how they protect girls at risk of FGM/C in the UK.‍

Objective of the webinar

‍The aim of the webinar was to consider with experts in FGM/C whether FGMPOs might be effective in other jurisdictions as well, particularly across the EU. We aimed to share information, encourage discussion about the purpose and impact of FGMPOs and provide insights on the implementation and enforcement of FGMPOs in the UK.

‍We invited several experts for the panel discussion as we found it important to highlight different perspectives. The panelists included:

‍Chiara chaired the webinar and welcomed all participants (almost 100 people participated!). After a short introduction about the End FGM European Network and the members of the Network, Chiara introduced all the panelists. Charlotte gave a presentation entitled ' FGMPOs: An Introduction to the British Context.' She shared with us that FGM/C is a serious problem in the UK today. A 2015 study estimates that approximately 103.000 women and girls are living in England and Wales with the consequences of FGM/C. Despite FGM/C being criminalized in 1985, there has only been one conviction in February 2019. Charlotte continued to explain that implementing the criminal law raise considerable barriers to combatting FGM/C, such as fears about criminalizing family members after FGM/C has already taken place. After a governmental inquiry into FGM/C in 2013-2014, a group of human rights lawyers proposed the introduction of FGM Protection Orders, FGMPOs. In 2015, FGMPOs were introduced in England, Wales and Norther Ireland, and in the meantime have also been adopted by Scotland in 2020. FGMPOs were modelled after Forced Marriage Protection Orders (FMPOs), which had already proved to be effective. It is an injunctive remedy designed to encourage women and girls to seek legal protection through courts. The ultimate aim is to protect a girl from undergoing FGM/C. 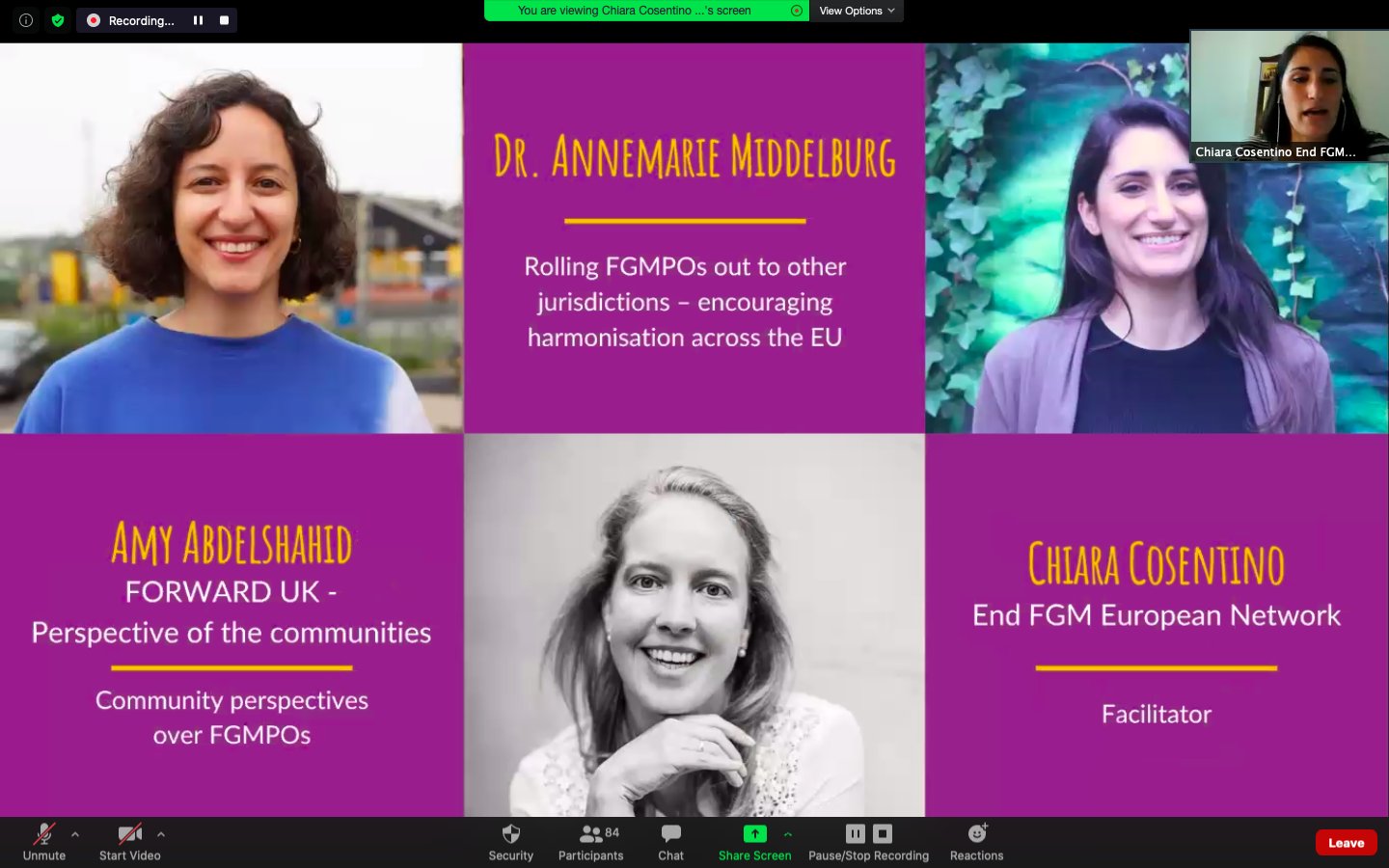 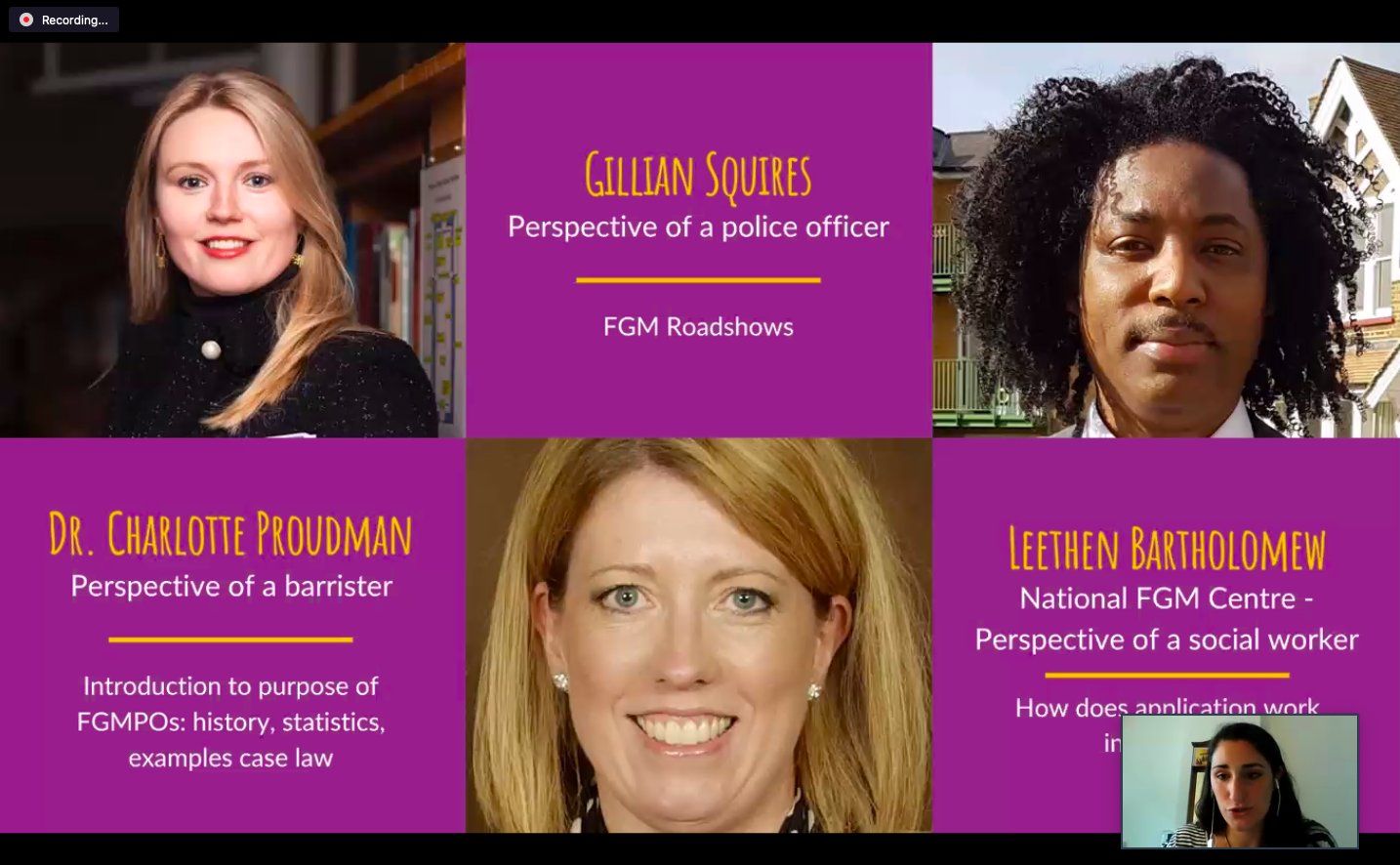 ‍FGMPOs can for example ban the girl or family members from traveling to a country where she might be cut, or require that the girls undergoes a medical examination after returning from their holiday to see if she had undergone FGM/C. Charlotte and I shared some benefits of FGMPOs with our audience. First of all, they are civil orders and henceforth do not criminalize the families of the girls, with all its consequences. Furthermore, FGMPOs are much less draconian than criminal prosecutions or ‘care proceedings’, in which the child can be taken away from the parents due physical or sexual abuse. What one needs to understand about FGM/C in this sense, is that parents or family members do not wish to maliciously  harm a child with FGM/C, they may believe it’s a moral practice or religious duty, or feel like they have no choice in the matter due to external pressure. That is also why besides the girl fearing FGM/C, a relevant third party (i.e. local authority) or any other person with the leave of the court could apply for an FGMPO. Charlotte explained that there  have been numerous  cases of mothers who did not want their daughters to undergo FGM/C and applied for an FGMPO.

FGMPOs have a proven track record of preventing FGM/C and protecting potential victims. From July 2015 until September 2019, a total of 408 applications for FGMPOs were made to the Family Court in England and Wales. From these applications, 489 orders have been issued. This number is higher than the amount of applications, as multiple orders can be issued for the same case and a court can issue an order on its own initiative when it suspects there might be a serious risk for a girl.

Charlotte also shared some concrete examples of FGMPO cases, which sparked the interest of the audience. For example, she shared the story of Rosie. In this case, a Nigerian mother had a 16-year-old daughter. She feared that her ex-husband sought for FGM/C to be performed on her daughter. The mother applied for an FGMPO with the support of a social worker and the FGMPO was granted to the girl until she was 18.‍

‍I explained to the audience that many girls are at risk of FGM/C in the EU and that we currently fail to protect girls and women, as there is evidence that girls are cut in countries of origin (during school holidays). Art. 53 of the Istanbul Convention obliges State Parties to make protection orders available to the victims of all forms of violence against women, including FGM/C. There also multiple Directives, Resolutions and Action Plans adopted by the EU which cover the  subject of legal protection from FGM/C. For example the ‘Victims’ Rights Directive’, which obliges member states to make sure that victims receive adequate support, protect and access to justice, and that these mechanism are harmonized throughout Europe. However, there are still many differences in relation to protection mechanisms for (potential) victims of FGM/C across the EUs. And this problem does not apply to Protection Orders alone.

‍The British mechanism of FGMPOs is not yet perfect and there are some challenges. Leethen Bartholomew and Amy Abdelshahid shared with us their experiences in relation to the impact of FGMPOs on families and communities, who may not fully comprehend the more limited scope and non-punitive character of FGMPOs or are still under a travel ban after they have already changed their mind on FGM/C. There is also a problem of misinformation and limited knowledge or awareness of FGMPOs among families, officials and social workers, Gillian Squires told us. This is the reason why she travels through the UK and organizes roadshows to teach more and more people about the workings of the mechanism.

‍However, FGMPOs have proven to be an effective legal remedy in the UK that can prevent and deter FGM/C. Charlotte and I therefore concluded that other jurisdictions should follow the example of the UK and roll out FGMPOs as well. We believe that it is important to harmonize anti-FGM/C laws and policies across the EU to ensure that the EU's anti-FGM/C strategy is consistent across Member States.The recording of the webinar is available here:

Materials from the webinar 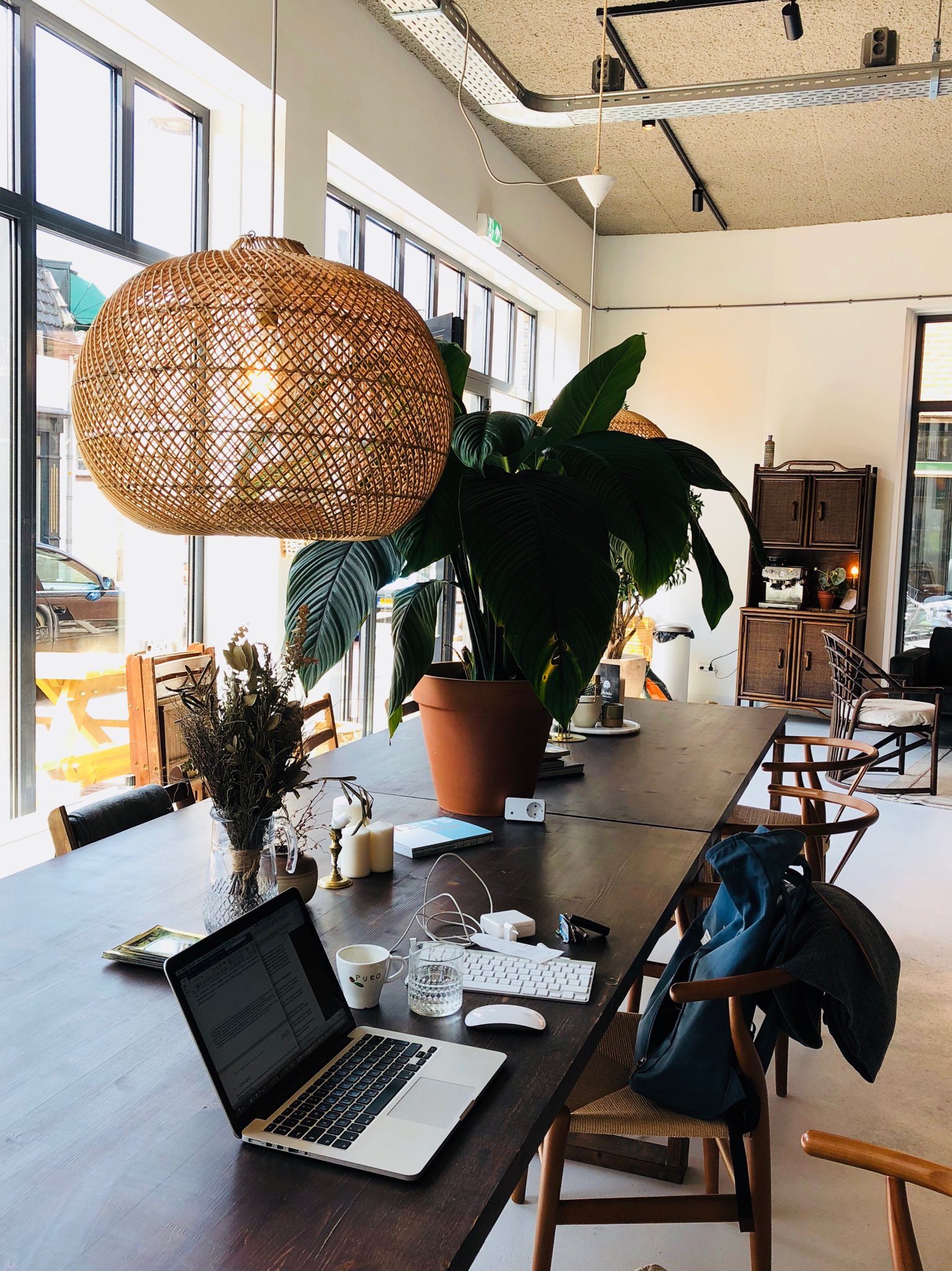 Education
·
January 1, 2021
·
2
min
The places where I work
Written by
Dr. Annemarie Middelburg